My love affair with Japanese culture --and particular weakness for Japanese snacks-- is fairly well documented around the blog.  So you'll imagine my excitement when I discovered a Japanese candy subscription that ships out J-snacks not once, but twice a month!  An investigation was in order. 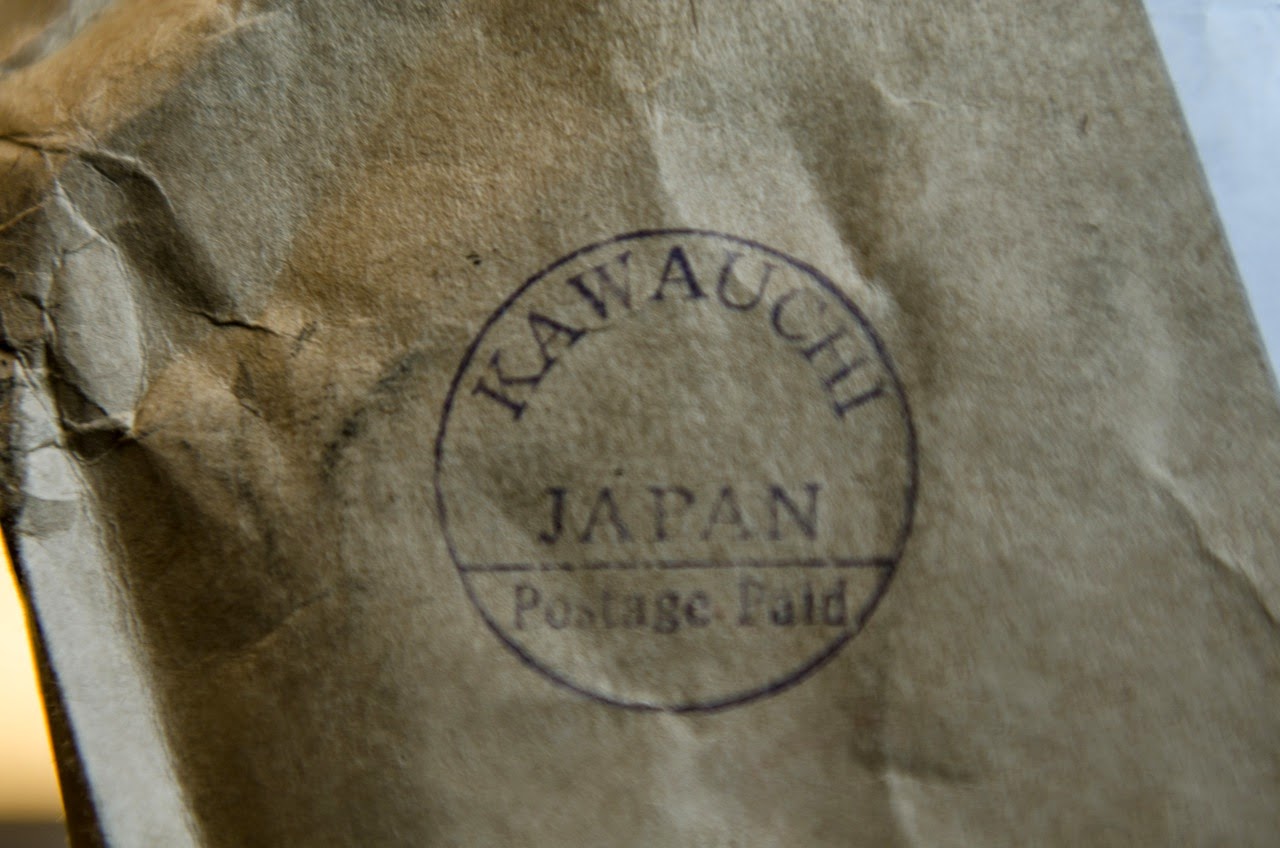 Luckily for me, Candy Japan was gracious enough to send me a complimentary candy shipment for review.  I was especially grateful, because Candy Japan is a one-man show, remarkably sourced and run and packaged and mailed by a Finnish expat living in Japan, so I'm sure he has to be mindful of his resources.  Thank you, Bemmu! 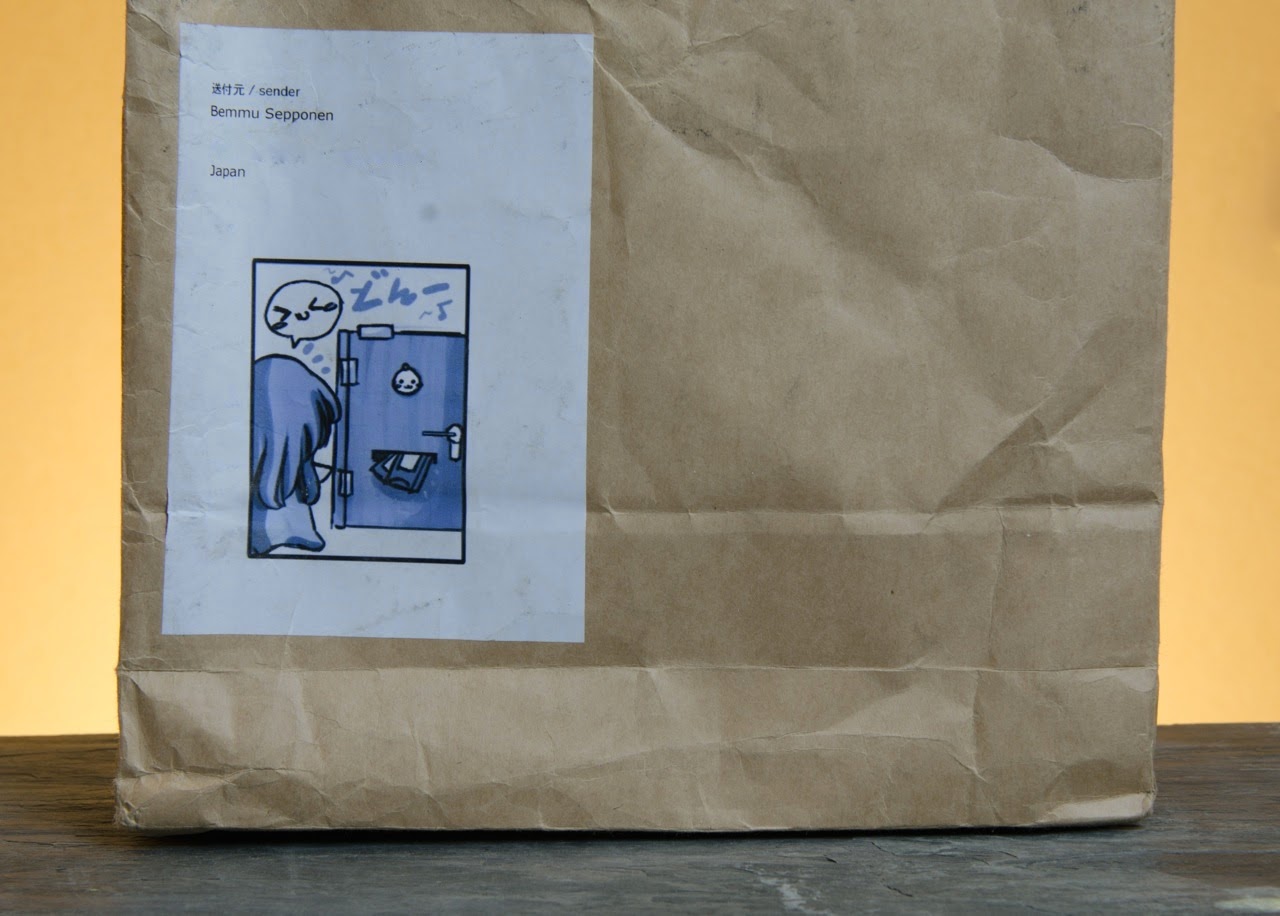 So how does the sub work?  Well, in the spirit of Japanese manga, Candy Japan put together this handy infographic (which I borrowed from its website) that does a better job of explaining than probably this entire post:

And that's basically it!  A monthly sub is $25, which includes shipping and handling worldwide (!), and includes two snack and candy shipments delivered roughly every two weeks.

This is what my shipment looked like out of its mailer: 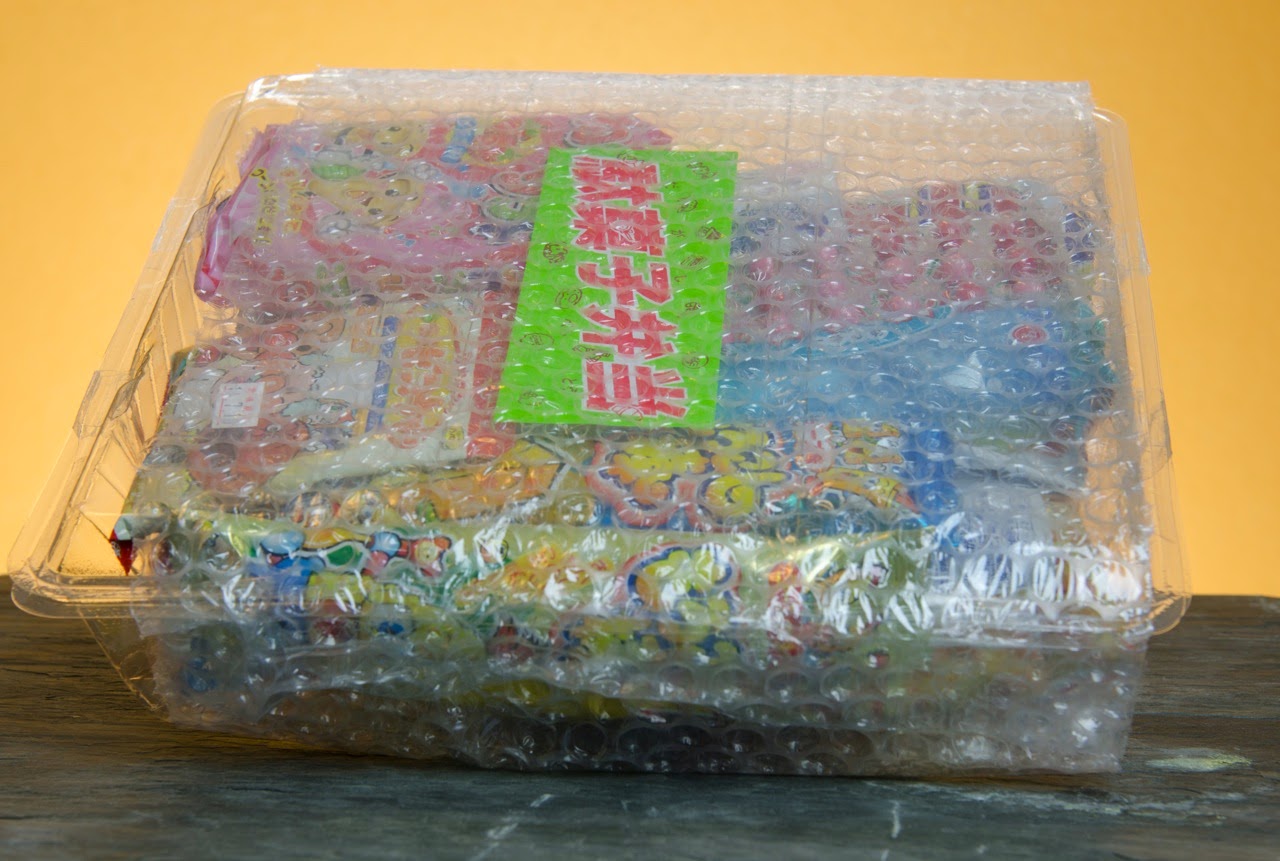 And after shimmying out of its bubble wrap sleeve: 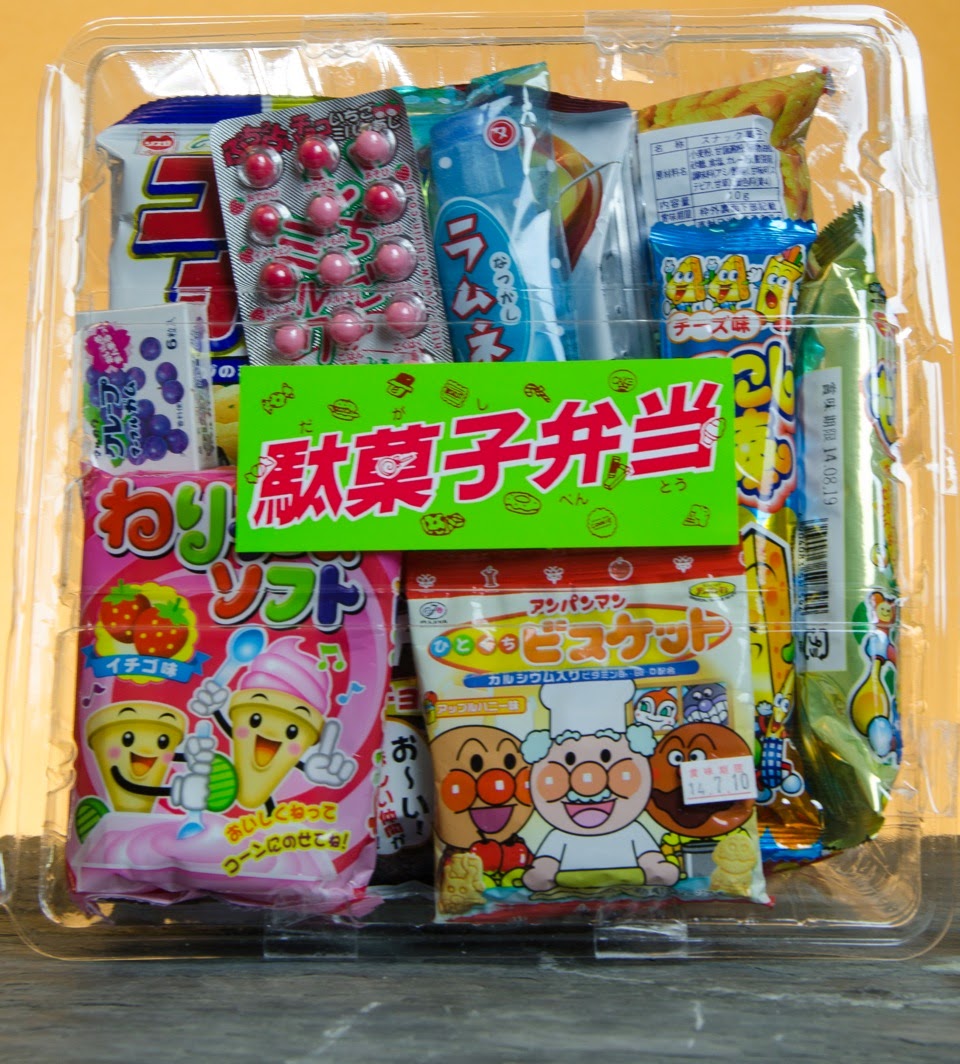 About as colorful as Shibuya!  Honestly, packaging is at least half the fun of Japanese candy.  Why can't the rest of the world get hip to dancing cheese wedges and prancing ice cream cones? 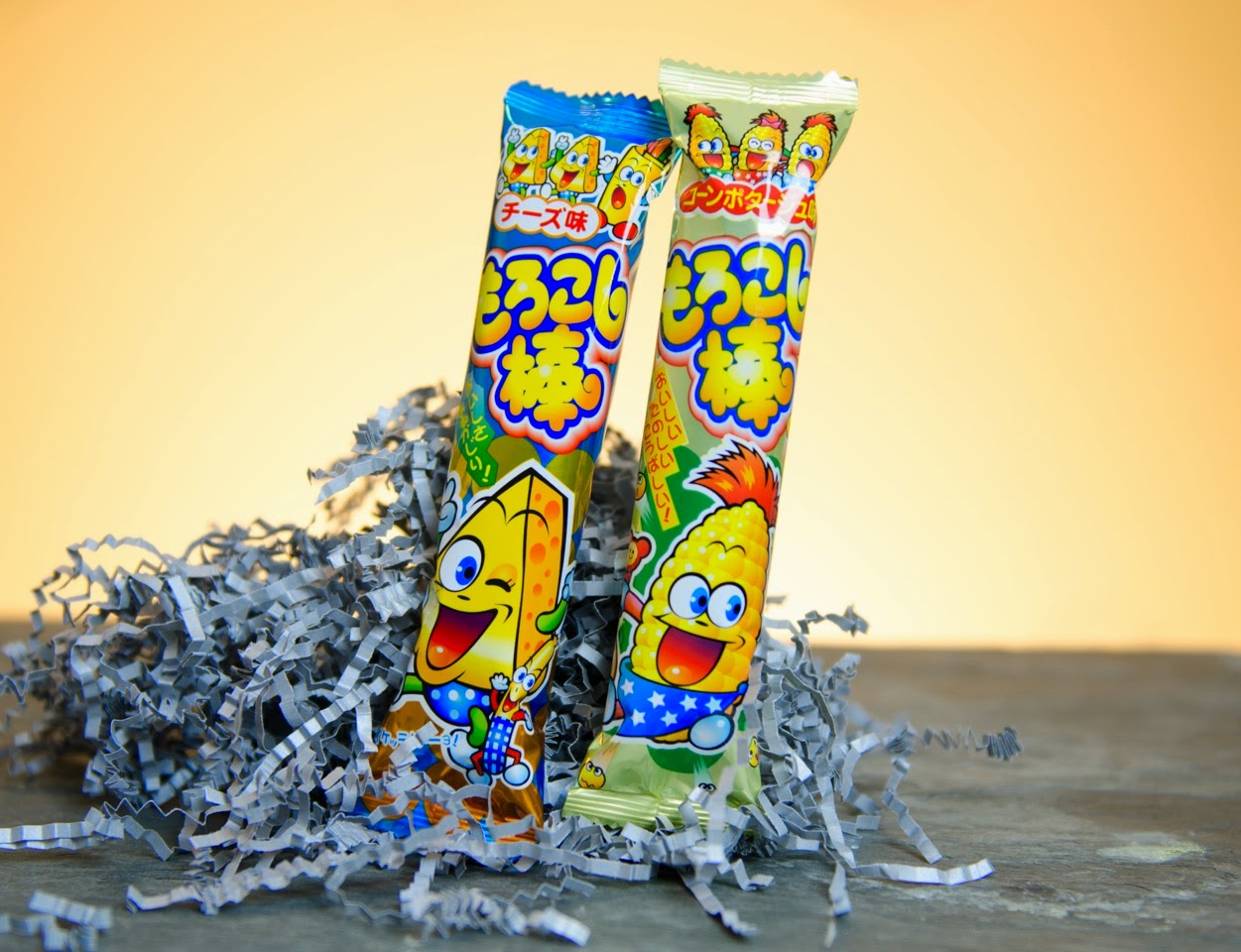 I'm obsessed with these handsome fellas.  They're umaibo (read: yummy) sticks, cylindrical corn puffs that come in a variety of flavors.  Think oversized cheesy poofs.  Deductive reasoning leads me to believe the guy on the left is cheese flavored, while the guy on the right is corn or corn potage (corn potage appears to be a thing among J-snacks -- who knew).

Fine-tuned deductive reasoning skills will come in handy with this sub, as shipments will arrive (gasp!) without info cards.  Which means 99.9% of your packaging, ingredients (beware, allergy sufferers), and labels will be in Japanese.

I find unwrapping a box of colorful mystery goodies I essentially get to blind-test really fun, but I could see how that might scare some people off.  Candy Japan will email you some days after shipment detailing the contents of the box, but I personally think it's cool that you have some time to play with your food.

My package included a pretty varied assortment of goodies, from candy to savory snacks to sweet treats, which I also think is great.

Incredibly, there were no Pocky and no funky-flavored Kit Kats to be found among my snacks!  I mean I'll never turn down a Kit Kat, but I will say I think they're overrepresented in the world of J-candy, so I was happy to get a more unexpected selection of treats.

Although I loved receiving a huge box of treats, I don't think my snacky bounty is representative of the usual Candy Japan bimonthly shipment -- I'm presuming I got two biweeklies combined into one mailing. According to its site, you can generally expect to receive between one and three items in each package, so if you sign up just know you'll probably be receiving about half of the things you see pictured in this post per delivery.

Seen enough?  Ready to get into your own delicious, exciting, and cryptic subscription of Japanese snacks?  I don't blame you! Head over to Candy Japan to get started.

And let me know what you think!  Do you like the flying-by-the-seat-of-your-pants surprise tasting element of this insert-less sub?  Would you like to know what turtle popcorn tastes like?  Are you also obsessed with umaibo sticks?  Let me know in the comments.

This post does not contain affiliate links, referral links, or other forms of advertising for compensation. The box and products therein were provided free of charge for review purposes. Regardless, all opinions are my own and never affected or influenced by sponsorship. For full disclaimer and disclosure details, click the disclosure tab above.
at 7:45 PM